This from a CF news release:

“One Canadian soldier was killed when an improvised explosive device detonated during a dismounted partnered patrol in the Panjwa’i district of Kandahar Province at approximately 12 p.m. (noon) Kandahar time on Sunday, March 27, 2011.  Killed in action was Corporal Yannick Scherrer, from 1er Battalion, Royal 22e Régiment, based at CFB Valcartier, Quebec serving with 1er Battalion, Royal 22e Régiment Battle Group.  We are all thinking of the family and friends of our Canadian fallen comrade during this sad time. We will not forget Cpl Scherrer’s sacrifice as we continue to bring security and hope to the people of Kandahar Province ….” 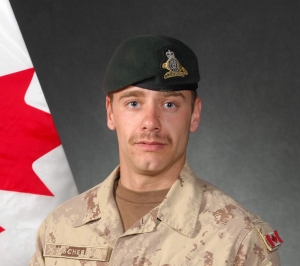 Condolences to the family, colleagues and friends of the fallen.  We mourn with you.