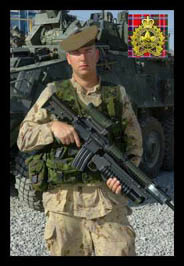 ….with a loved one happy to share the fallen’s thoughts and feelings with the media, via CTV.ca:

“As Canadian soldiers assembled at a ceremony in Afghanistan to send off the flag-draped casket carrying Pte. Jonathan Couturier, a report has surfaced in Quebec saying the 23-year old tried to stay positive about the mission, but quietly considered it as futile …. the young soldier’s brother told Le Soleil newspaper in Quebec city that Couturier doubted whether the NATO-led Afghanistan mission was accomplishing much.  “That war over there, he found it a bit useless — that they were wasting their time over there,” Nicolas Couturier was quoted as saying in the paper. Such criticism of the war is rarely heard from family members in the wake of a soldier’s death in Afghanistan. Relatives almost always speak of their belief in the mission’s purpose, saying their family member died for an important cause.  Couturier’s sister-in-law said he voiced his criticism quietly. “He wouldn’t talk about it, he stayed positive, but at some moments he said he was fed up,” Valerie Boucher said ….”

Here’s the original in French in Le Soleil (with a clunky Google English translation here).

This isn’t the first time the media has lept on the second- and third-hand sharing of alleged comments from the fallen (and a statement from another family member (PDF)  didn’t help much, either).

A bit advice from Christie Blatchford, Peter Worthington and National Post columnist Brigitte Pellerin about maintaining some perspective in interpreting such statements – let’s see if there’ve been any lessons learned here, shall we?